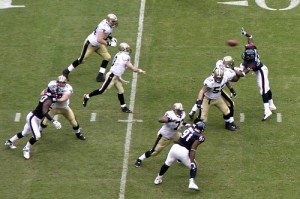 In 2013 the average NFL team threw 35.42 times a game as opposed to 32.21 times per game just ten seasons ago. That figure has continually grown annually, resulting in the increased fantasy value of QBs. Whether you have an all-pro future HOFer like Drew Brees or Peyton Manning, or a young developing arm such as EJ Manuel or Ryan TannehilL, modern offensive coordinators are not hesitant to put their gameplan in the quarterback’s hands and give him one opportunity after another to score big for your fantasy team on any given week. To help you capitalize on this bull market of passing statistics, here’s how they rank in fantasy value:

We’re all aware of what #18 did last season. If you played fantasy football in 2013, you likely either owned Peyton or he owned you. All the stats and performance metrics have been historic for Manning since leaving Indy for higher altitude. Some skepticism remains, and rightfully so. The man is 38 going on 39 and his neck is always a concern, after multiple surgeries and decades of supporting that colossal head. Here’s why you shouldn’t overthink Manning’s age/condition and take him mid–to-late first round and ahead of any other QB: No other NFL player this side of Johnny Backup gets more media coverage than Peyton Manning. From his off-field commerce to his film study/hot tub sessions to the exhausting “legacy” talks; the man is under a microscope. If there was any tangible decline in his game, (remember he’s never had elite arm strength or athleticism; much of his success if cerebral) or a sprinkle of discomfort in his neck, I would be writing about it and you would already know about it and America would be freaking out. Hence, don’t be a contrarian and sell Peyton Manning short.

Consider this: Drew Brees has only missed two starts in ten seasons. There have been eight 5000+ passing yard campaigns in NFL history, Brees has four of them: (2008, 2011, 2012, and 2013). Although he was limited in training camp and the first half of preseason due to a strained oblique, he looked like his usual crisp and decisive self in the dress rehearsal game against the Colts. The Saints’ loss of Darren Sproles and his 71 receptions is offset by the drafting of first-round rookie wide receiver Brandin Cooks, who by all accounts has shown immediate playmaking ability and is already one of the league’s fastest wideouts. Think a rich man’s Kenny Stills. Perhaps most importantly, “tight end” Jimmy Graham is reportedly in good health and quicker than ever after battling nagging foot injuries for much of 2013. The combination of his durability, consistency and shiny arsenal of weapons gives him the marginal edge over Rodgers as the number two QB in fantasy. If Brees is available late in the first/early in the second, he’s one of the safer bets you can make at that spot (referring to 12+ team leagues).

Despite missing seven games last season due to a broken collarbone, the outlook is as bright as ever in 2014 for Rodgers. At a ripe 30 going on 31, we can reasonably assume that the highest rated passer in league history has multiple seasons left in his prime. Don’t forget that in 2011 and 2012, he averaged 42 TD passes to just 7 INTs. If Rodgers is available to draft at any point in the 2nd round, he’s well worth it. Why I don’t have him over Brees: it’s a bit overambitious to predict top-five RB production from Eddie Lacy (which I do) while Rodgers also out-produces Brees.

Remember that 5000+ passing yards club from earlier? Well the 26 year-old Stafford became a member in 2011 and was 33 yards away from repeating in 2012. Last season the gun-slinging Stafford may have regressed slightly, with many pointing out poor throwing mechanics as a main culprit. After an offseason to iron out the kinks, Stafford returns with two potentially explosive new weapons to help take defenders away from Megatron in Golden Tate and Eric Ebron. You may notice a drop off on this list from 3 to 4, and that’s significant. Remember this position is increasingly deep, and Stafford hasn’t showed the consistency to be included in    the above Big Three of fantasy QBs. Due to the abundance of comparable options, Stafford should not be drafted any earlier than mid-to-late 3rd round.

Andrew the Giant finished 4th last season amongst fantasy QBs and may have overtaken Cam Newton for 3rd on that list had the Colts not ran a single back power formation for much of the season that saw Trent Richardson yield under three yards a carry. In fact, Andrew Luck threw the ball 570 times last season as opposed to 627 times during his rookie campaign. All reports indicate the Colts’ staff plans to abandon much of the power running schemes we saw last season and give Luck more throwing opportunities. Equally significant is Luck’s rise in efficiency: He completed 54% of his passes his rookie year to 60% his sophomore campaign. Combine that with the reportedly healthy return of sure-handed veteran Reggie Wayne and the FA acquisition of Hakeem Nicks, this just may be the season Andrew Luck’s production matches all the hype.

The great Tom Brady finished a pedestrian 13th amongst fantasy QBs last season but remains the 6th QB off the board in aggregate ADP and rightfully so. The 37 year old is primed to have a bounce back campaign. Tom Cool completed 60.5% of his passes in 2013, his lowest mark since the glory days of “game managing” back in 2003. Did Brady regress? Many analysts point to the inexperienced crop of receivers who finished 2nd in the league in dropped passes with 41. Their three most dynamic playmakers Shane Vereen, Danny Amendola and Rob Gronkowski missed a total of 21 regular season games last year. All three players appear to be in much better health and the Patriots also return receivers Julian Edelman, Aaron Dobson and Kenbrell Thompkins for another season of catching passes from #12. If Brady is still Brady, his 2014 campaign will destroy his subpar 2013.

Many have the young Philadelphia star Nick Foles ahead of the proven commodity that is Mat Ryan, causing Ryan to slip past the fifth round (Ryan is the 9th QB off the board in 2014 drafts)in many cases making the two-time Pro Bowler a great value pick at QB: A healthy Julio Jones plus a lack of an established running game for Atlanta points to a big bounce back year for Matty Ice after a forgettable 2013.

Newton finished a very impressive third last year in QB fantasy points but is being taken in the 4th to 5th round of most drafts, behind several QBs who didn’t compare in 2013. Cam has shown no signs of regression and will start Week 1 with confidence despite battling rib fractures. With that said, the Panthers are still limited in the passing game and rookie wideout Kelvin Benjamin replacing Steve Smith’s production may be a bit wishful thinking. The QB position is deep and the Panthers need more weapons for Cam, but we all know he has the ability to score fantasy points regardless of who’s at receiver using his legs. He’ll be top ten for sure and don’t be surprised if he sneaks into the top again in 2014.

Unlike last season, the Napoleon Dynamite look-a-like QB enters 2014 with pretty high expectations. No QB besides Peyton Manning scored more fantasy points per start than did Nick Folse (Foles edged out Drew Brees by a point per game). Although repeating the efficiency of 27 TDs to 2 INTs will be all but impossible, Foles returns with more confidence and without the presence of Mike Vick and lockeroom politics hanging over his head. Expect big things, but don’t reach for him ahead of more proven QBs. Remember, being a consistent NFL starter isn’t easy. The final verdict is still out on Nick Foles.

Of the QBs ranked after the first “gap” (Mannings, Brees, Rodgers), Romo has a legitimate shot to outperform all of them in the 2014 fantasy season. He appears to be in the latter stage of his prime, having thrown 90 TDs to just 39 INTs the past three seasons. With that said, due to his questionable back and perhaps media-generated stigma, Romo has slipped outside of the top 10 QBs drafted. With dynamic weapons Dez Bryant, Jason Witten, and now Terrance Williams, his upside is huge and makes for a great value pick at the 6th round or later.

After Romo, there is a notable drop-off. Not in upside, QBs like RGIII or Jay Cutler may very well end up having top 10 seasons. The drop-off is in pre-Week 1 fantasy value. As in, the guys above that gap are relatively safe QB1 options (start em’ every darn week) and can be drafted higher with significantly more confidence than those below it.

The good: No team besides Denver scored more points than the Bears last season. In 2013 Jay Cutler posted a passer rating of 89.2, a career-high for the 31 year old. Oh and BRANDON MARSHALL AND ALSON JEFFERY.

The bad: Durability (Cutler has not played a full season in four years) and efficiency (112 INTs in 104 career games).

The good: By all accounts, Russell Wilson looked great during pre-season (yes, I know, who cares) with a 133.8 passer rating. On the receiving end of many of those passes was elite playmaker Percy Harvin, who is at full health for the first time since the 2012 season.

The bad: The Seahawks were 31st last season in passing attempts at just 420. Some weeks, Wilson simply will not be given enough volume to score big for your fantasy team.

The good: Washington acquired DeSean Jackson in the offseason to add to an already competent collection of weapons in Pierre Garcon, Alfred Morris and Jordan Reed. In Griffin’s one “healthy” season in 2012, he finished 6th in QB fantasy points. If you believe RGIII can be successful as a pocket passer, Jay Gruden is a pass-oriented coach.

The bad: The questions… Are you getting the 2012 or 2013 RGIII? Will he still run the HB option? Is he now more gun-shy about taking off and using his blazing speed? Will he continue to take damaging hits and miss time?

The good: San Fran will start the season without three of their top three defenders: NaVorro Bowman, Aldon Smith and Glen Dorsey. The defense on paper looks to have regressed from last season. Therefore, if the 49ers allow more points this season, they will be more aggressive with their playcalling, benefitting Kaep fantasy owners. Also, keep in mind that Kaepernick only has 28 games started under his belt and is still learning pro coverages and progressions. He has ample room to improve and may be read to take that next step.

The bad: The 49ers were dead last in passing attempts last season with 417. Coach Jim Harbaugh has a run-first philosophy and has brought a very sophisticated rushing game to San Francisco from Stanford. Like his contemporary Russell Wilson, there may be weeks where Kaep is handing it off too many times to score big for your team.

After this point, you are looking at largely QB2 options. As the cliché goes, the backup QB is the league’s most important position. The same can go for your fantasy league. When it comes to drafting a second QB, go with your gut-feeling. They are available by the bunch in the later rounds and quality backups still exist on the free agent market in most leagues. No one predicted Nick Folse or Josh McCown last season; quality, undrafted fantasy QBs rescue fantasy teams every year and one of these players below may just be that guy for you.

(Another gap: the players after this point may not ever be good starting options in 2014)