The Pick Up Artist 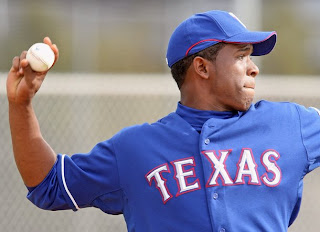 Welcome to the inaugural edition of The Pick Up Artist for baseball. I’ll be delivering the news on who your team should pick up each week to stay competitive throughout the Fantasy Baseball season.

While you might be reluctant to drop players during the first few weeks of the season, players are already emerging who can make your team more productive.

Stay tuned in all season for pick ups, opinions and obscure references from the world of film and music.

Pudge has started the season on a bit of a hot streak and might be able to stretch this into a very solid first half of the season. If you find yourself thin at catcher he’s worth a look. The Nationals won’t play him this much as the season progresses so you may want to use him now before his 38 year old legs wear down.

Sanchez and Barton don’t provide the type of power that I would like to get out of my first basemen but they have each hit well to start the season, are both available in a majority of leagues, and each can provide you with solid numbers across the board.

McGehee is one of the hottest players at any position in the opening month of the 2010 season. He may not be available for long so you’ll want to pick him up quickly. If McGehee is off the board look to Jeff Keppinger of the Astros for a quick fix at second.

While batting out of the 9th spot in the Pirates lineup Cedeno has looked great. He is swinging the bat very well and I won’t be shocked if he’s still batting above .300 2 months from now.

Blake is hitting well and looks like he’s hitting in a rhythm right now. As long as the errors at third base don’t plague him the way they have to start the season, he should continue to get plenty of opportunities at the plate.

Kansas City outfielders are not traditionally a great place to look for fantasy production but Guillen has been crushing the ball to start the season and looks to have fully recovered from the blood clots that caused him problems in 2009.

Podsednik is swinging a hot bat and has been given a green light on the base path. Definitely worth a look if you need to add steals to your roster.

Velez is available in almost every league but that will change quickly if he continues to fill in for the injured Aaron Rowand.  With Rowand being placed on the DL Velez should have plenty of opportunities to deliver for the Giants.

Romero is off to a brilliant start this season. His first two starts have resulted in 16 Ks, a 1.80 ERA, and a near no hitter. He is a must add in all formats.

Feliz struggled in his first appearance this season but has been absolutely untouchable since. In his last four appearances he has given up one walk and no hits. He should see plenty of save opportunities going forward.