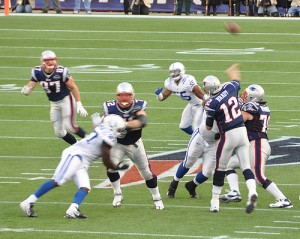 While it was a banner day for some (Matt Ryan and Matthew Stafford, to name a few), others struggled (looking at you Robert Griffin III). As always, the NFL was dominated by passing the first week of the season, and five quarterbacks put up 20-point performances.

Matt Ryan, Atlanta Falcons (30 points): A career-high in passing yards (448) and three touchdowns with no interceptions puts Matt Ryan at the top of this week’s tier one, and solidifies him as a must-play fantasy QB.

Matthew Stafford, Detroit Lions (29 points): Having Calvin Johnson to throw to will improve any quarterback, but the Lions had zero drops last night, which will make the wild Matthew Stafford even better. A promising sign for Stafford owners last night was Stafford’s decision making- zero interceptions.

Andrew Luck, Indianapolis Colts (25 points): Luck looked very good against the Broncos Sunday night, but much of his production was coming in catch-up mode for the Colts. Fantasy owners don’t care when points come, so Luck will always be a must-start in all leagues.

Peyton Manning, Denver Broncos (22 points): You had to know he was going to show up in tier one, right? Peyton was doing Peyton things- at least in the first half. Consistent production in week one from half to half would be nice, but there is no reason to worry about Manning.

Jake Locker, Tennessee Titans (19 points): I am just as surprised as you are that Locker is in tier two, but it is early in the season. The Titans offense was a little fortunate that two important pieces of the Kansas City defense went down, but 19 points is a great performance. Look for Locker to keep this going, for at least one more week, Tennessee plays the terrible Cowboys defense in week two at home.

Derek Anderson, Carolina Panthers (18 points): Derek Anderson took advantage of athletic freak Kelvin Benjamin on the outside and Greg Olsen on the inside. Anderson played well, but Cam Newton should be good to go for week 2 barring any setbacks, so this may be the last you hear of Derek Anderson for a while.

Andy Dalton, Cincinnati Bengals (18 points): Dalton has one of the best receivers in the game and only threw one touchdown, but 301 yards is nothing to scoff at. He also plays the Atlanta Falcons in week two, who allowed 333 yards through the air against the New Orleans Saints.

Jay Cutler, Chicago Bears (17 points): Cutler has many weapons at his disposal, and his head coach loves to spread defenses out and throw the ball. Cutler will always have fantasy value, but he needs to cut down his interceptions to jump up in to tier one.

Colin Kaepernick, San Francisco 49ers (17 points): Yes Kaep played against a bad Cowboys defense, but he also made some plays out of virtually nothing. He spread the ball around well, meaning defenses can’t focus on one receiver, and a good one-two punch of Frank Gore and Carlos Hyde should keep defenses honest.

Russell Wilson, Seattle Seahawks (17 points): Wilson made the Packers defense look silly last Thursday night, gashing them for many big plays. The Seahawks are still a run-first offense, so this could be a high-end performance for Wilson, but his scrambling ability improves his value.

Ben Roethlisberger, Pittsburgh Steelers (16 points): The majority of Big Ben’s points came in the first half against the Browns, as the Steelers were shut out in the second half except for Shaun Suisham’s game-winning field goal. It was a nice opener for an unlikely fantasy commodity, but consistency will be key for Big Ben going forward.

Chad Henne, Jacksonville Jaguars (16 points): People, mostly Jags fans (ok, only Jags fans), were pleasantly surprised that Henne put up some pretty big numbers. He plays the suspect Redskins defense in week two, so another solid performance should come, but don’t expect him to light the fantasy world on fire.

Drew Brees, New Orleans Saints (15 points): If you would have told me Chad Henne would have more fantasy points after week one than Drew Brees, I wouldn’t have believe you. The yards aren’t a problem and won’t be a problem for Brees, he three for 333 against the Falcons. He plays the Browns this week and the Saints love to throw the ball, so look for more than 15 points for Brees.

Joe Flacco, Baltimore Ravens (15 points): Flacco didn’t look good at all in the first half, and the Ravens were forced to throw the ball later in the game. Flacco did throw for 345 yards, but only one touchdown. This performance was par for the course for Flacco.

EJ Manuel, Buffalo Bills (15 points): Manuel only threw for 179 yards with a touchdown and an interception, but he also ran one in for a score. His fantasy value is tied somewhat heavily to his scrambling ability, so he’s worth a start for that, but only in deeper leagues.

Matt Cassel, Minnesota Vikings (14 points): Cassel only threw for 170 yards but he did throw for two scores. There’s not much fantasy value in Cassel, but he may be worth something in deeper leagues.

Nick Foles, Philadelphia Eagles (14 points): After a bad first half, Foles and the Eagles rebounded to thrash the Jags by 17. Foles should still be a starter in most leagues, so don’t be worried by one bad half.

Derek Carr, Oakland Raiders (14 points): A surprisingly good start for the rookie against a good Jets defense, but he still has few receivers and an aging running back corps.

Ryan Tannehill, Miami dolphins (13 points): I didn’t include Tannehill in the group above because he showed flashes of promise on Sunday. He seemed to have a good feel for the offense and a good rapport with Mike Wallace. Tannehill is a good bye week play.

Philip Rivers, San Diego Chargers (12 points): Rivers played against a very good Cardinals secondary and still put up good yardage numbers. He should get better as the season goes along.

Geno Smith, NY Jets (11 points): another boring game from Geno in a run-first offense. No thanks.

Tier 4: The Rest of the QBs, With Some Big Names

Tom Brady, New England Patriots (9 points): Brady didn’t play poorly, but he didn’t light the world on fire, either. An average game from someone who we expect more from.

Aaron Rodgers, Green Bay Packers (9 points): I wouldn’t read much into this performance, as he played the best defense in the league on opening night on the road. He plays the Jets next week, but a home game should be good for the Packers offense as a whole.

Eli Manning, NY Giants (6 points): Don’t own him and definitely don’t play him.