Fantasy Football Resource|Sunday, May 29, 2022
You are here: Home » Uncategorized » Week One WR Rankings 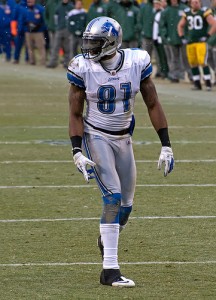 With the NFL now dominated by passing, if you do not possess a very strong core of wide receivers on your fantasy team, you will get blown out on a weekly basis. The days of a dominant running game and average receivers is long gone (unless you really strike it rich in your draft coupled with some key injuries or surprising waiver wire pickups).  The good thing is that WR is a very deep position and sometimes the third option on a great offense still beats a number one on say, the Raiders. Weekly rankings of the position can be very unpredictable after the Megatron-led top tier. Though it may be a deep talent pool, that still does not guarantee fantasy success. Many leagues still have teams that are so deep with WR talent that the owners have too many options and do not even miss a beat during bye weeks and major injuries, while the cellar dwellers have trouble fielding a respectable lineup of pass catchers. Those of you who tried to get cute drafting a kicker or defense early while others were stockpiling their receiving talent (and RB’s), won’t be laughing when your opponent trots out studs during heavy bye weeks and you are scouring the waivers for somebody who may get a few looks. Getting good depth at WR is more than just having backup options for your own team, it ensures your opponents won’t use them against you if needed. Always load up on WR’s on draft day.

1. Demaryius Thomas, Denver Broncos. What? No Megatron on Monday night? Wes Welker has been suspended and I still like Peyton Manning on Sunday Night against a bad Colts D. Thomas should go off without Wes and the departed Eric Decker. Lots of points all around.

2. Julio Jones, Atlanta Falcons. Looked great in his last preseason game and this should be high scoring also. He claims he is not quite at 100%, but I think he feels just fine under the bright lights.

3. Calvin Johnson, Detroit Lions. There he is.

4. AJ Green, Cincinnati Bengals. He always seems to play well in preseason games and Andy Dalton is going to come out firing to justify that huge contract he just signed in the offseason.

5. Dez Bryant, Dallas Cowboys. Huge year coming from him and this matchup is not as scary as it used to be. At least early in the season.

6. Brandon Marshall, Chicago Bears. You can pass on the Bills, even with their tough pass rush. Both Bears receivers should have big games. Go with the veteran slightly above last years breakout star due to it being the opener and Marshall will want to shine.

7. Andre Johnson, Houston Texans. Even with Ryan Fitzpatrick throwing it, the Redskins defense scares no one.

8. Victor Cruz, NY Giants. Eli and the Giants offense looked terrible in the preseason, but I feel they will be down early and forced to play catchup. The lions secondary being poor helps too.

10. Alshon Jeffery, Chicago Bears. Both Bears receivers flirt with 100 yards and a td in a blowout.

11. Antonio Brown, Pittsburg Steelers. He actually plays well matched up against Joe Haden and with the losses on Emmanuel Sanders and Jericho Cotchery, there are even more targets for him to snatch up.

12. Pierre Garçon, Washington Redskins. I think he still gets his with DeSean around.

13. Larry Fitzgerald, Arizona Cardinals. I am not big on him this year, but star players tend to come out for Monday Nights, especially season openers.

14. TY Hilton, Indianapolis Colts. Two words, garbage time. They will be down early to Peyton and the Broncos and have to go down the field in a hurry to catch up. TY excels in these types of games.

15. Vincent Jackson, Tampa Bay Bucs. Not sure if Carolina’s D will be as dominant as last year and Vincenzo is a streaky player. I like him to streak towards the end zone in this one.

16. Michael Crabtree, San Francisco 49ers. Didn’t like their offense in the preseason, but I dislike the Cowboys defense even more.

17. Jordy Nelson, Green Bay Packers. Very tough matchup to open on the road, but there still is this guy named Aaron Rodgers throwing the ball to him and they will probably be playing from behind at some point.

18. Keenan Allen, San Diego Chargers. He will be facing Patrick Peterson, but has looked extremely explosive during camp and added more deep speed to his game.

19. Emmanuel Sanders, Denver Broncos. No Wes Welker and a high scoring game with Peyton flinging it around. Remember what happened in last years home opener for the Broncos?

20. Roddy White, Atlanta Falcons. Shoot out with the Saints and he is looking to make an early season statement after last year.

21. Eric Decker, NY Jets. Because I do not think as low of him and Geno Smith as most. At least for one game against the Raiders starting a rookie QB where there may be plenty of three and outs getting them the ball back.

22. Jeremy Maclin, Philadelphia Eagles. Normally I would be higher on a player from a high powered offense playing at home versus the Jags. That player happens to be their RB and Maclin’s knee scares me after seeing him in the preseason crumple to the turf after a non-contact play.

23. Michael Floyd, Arizona Cardinals. I almost swapped him and Fitz, but I was not that daring this early in the year yet.

24. Randall Cobb, Green Bay Packers. His ranking would be much higher for ppr, and they still are the Seahawks.

25. DeSean Jackson, Washington Redskins. I know they will at least try to get him a deep ball or two.

26. Brandin Cooks, New Orleans Saints. In a shootout, plenty of the Saints could join Jimmy Graham in the scoring column. Welcome to the league rookie, move over Marques Colston. I like him even more in ppr this week, but I feel a score and some yardage coming this week as he really introduces himself to the NFL after quieting down the past couple weeks post training camp buzz.

27. Justin Hunter, Tennessee Titans. I like him over Kendall Wright this year, though Kendall May out ppr him, this is a standard scoring prediction and he is a much more dangerous red zone threat.

28. Torrey Smith, Baltimore Ravens. The Bengals have a good secondary, but Joe Flacco has looked rejuvenated this year and having Steve Smith across from him should help alleviate some pressure.

29. Cecil Shorts, Jacksonville Jaguars. They will be down early and throwing. I do not quite have the bold guts to put Marqise Lee on this list. Not yet. Shorts seemed to pile up the garbage time points two years ago during each and every blowout during the second half of the season.

30. Kelvin Benjamin, Carolina Panthers. I will gamble on KB to have a nice opening game as he shows why the hype is justified.